If you had lived hundreds of years ago, what kind of work do you think you would have done? What job would you have wanted to do?

In case anybody wonders why I’m relying so heavily on ‘prompts’ at the moment, it’s because nothing inspiring is happening in my real life. Well, there’s the saga of Mum – but that situation is becoming so ghastly, it’s passing into the realms of the un-writable and the unreadable. It’ll pass, eventually – by its very nature it has to resolve itself within the next decade or so (decade – what am I writing? I can’t bear to think decade.) but in the meantime who wants to be depressed? Not you – and not me. No siree! 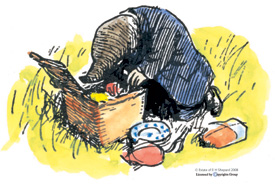 I suppose I might share that the postwoman turned up in a rabbit hat yesterday, with earflaps, eyes and whiskers. She must have a cupboard full of such hats which don’t, for some reason, seem to contradict her uniform. Everyone round here is a trifle strange – they do say there’s inbreeding – but not in a deliberate or amusing way. I find the hats a comfort.

I could tell you that I spotted what looks like yet another stray cat, eating the slimy remains of somebody’s takeaway from a plastic tray on the pavement. I keep putting food out in the cat-kennel (big enough, in fact, for an Alsatian, should a stray Alsatian happen along). I keep trying not to look out of the kitchen window; keep hoping not to spot another imploring furry face and mangy little body. The house is alive with cats as it is. Just getting to the kettle involves a kind of wading motion.

I could tell you that I thought of walking down to the one and only shop to get a newspaper, but it was too b***** cold. Really it’s arctic here. And yet sunny. Which somehow makes it worse. Last night the wind did its usual night-banshee thing, prowling around and tearing at the wooden fence-panels. It usually manages to demolish most of them over winter. In spring the fence-panel men come out in force, hammering and splicing; whistling gaily. Bonanza!

So, I found this prompt in a blog called The One Minute Writer, published on a rival platform which I suppose needs to be nameless – in the same way as the BBC maintains the fiction that its rival terrestrial station, ITV, is some kind of foul myth or rumour. It’s an old one – you have to trawl pretty determinedly to find an interesting one. Not like The Daily Post, where the odds of striking gold are about 50:50.

It’s vague, isn’t it? I mean, it would depend how many hundreds of years ago. Are we talking Neolithic, Medieval, Victorian? And are we talking man or woman? If we’re talking woman – well, it’s likely to be something to do with house-cleaning and child-rearing, isn’t it? Or stone-picking in some frozen field or other. Whether in a cave on a mountainside, a hovel in a cobbled street or a mansion in Berkshire. Same old, same old. Cleaning – or supervising the cleaning of others. Farm work, maybe. Babies. More babies. More still. Maybe a bit of embroidery and letter-writing. Or there’s the nunnery. So first, choose a time and a gender.

I used to think I’d like to have been a wandering minstrel, going from castle to castle and making up songs as I tramped. So, this would be Early Medieval (and male). I used to worry so about not-writing, in my teenage years, having learned that for much of time most people wouldn’t have been able to write, and that before William Caxton and the invention of the printing press, even if you had written something nobody but your close friends would have had sight of it – as a handwritten copy circulated amongst your friends. Oh no, I anguished – I could even worry hypothetically – whatever would I have done if I had been born in those days? How could I have borne to exist? But then I realised that the written word was only one form of story-telling – music and ballads and told-tales were another. I would have remembered the stories I made up as I trudged along high moorland pathways amidst gorse bushes, forded streams barefooted and slept in brambly ditches. My memory would have been sharpened and trained from infancy – everybody’s would.

And I would have liked the wandering – the open air, the lack of roots or ties. If I couldn’t be a minstrel perhaps I could be in a gypsy troupe, going from town to town to do – juggling and stuff – in the marketplace. Or, closer in time to the present day, a higgler. There is a short story by A E Coppard called The Higgler. Higgler is another version of the pedlar. It’s someone who travels around the countryside selling things door to door – household necessities, ribbons – anything he can find a market for – which he would carry in a back-pack or on a cart. In the story, a struggling higgler falls in love with Mary a girl he meets on his route. The girl’s mother offers her to him in marriage, together with a small fortune – but he wavers, becomes suspicious and loses both Mary and the money.

Now, bother all that. I’d just like the wandering around part. Seeing different places, being alone a lot of the time, living from day to day. That’s at the heart of it, maybe – not having to think beyond today – not having to plan. Having very little – no bills, no dwelling place, no ties, no responsibilities. Bit like that feeling you get in motorway service complexes – floating between lives, no history, no draggy old personality (that anyone knows about) – just existing for a while. The refuge of the roads.

Mr Toad – maybe I should have been Mr Toad from The Wind in the Willows, with his motor car and his beep, beep, beep…. 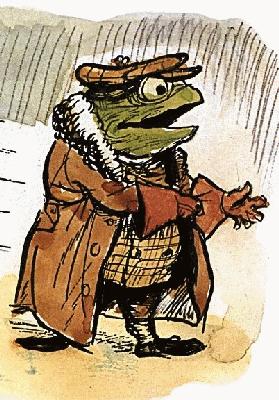