Mirrors – I always think of one particular mirror which used to hang on the wall above the fireplace in my parents’ house. Long gone now. I suppose it may still exist, in a junk shop somewhere, or maybe it has been repurposed to suit some chic 1950s retro apartment. It was a lovely thing, the corners cut in a fluty, art-deco style; the pattern repeated in cream around the edges of the glass. Suspended by a chain from a hook on the wall, it made everyone who looked in it beautiful. That was the glass. It was tinted a delicate pinkish-gold. It was not a very good mirror, by modern standards. One’s reflection was spotted and broken where the silvering on the back had worn away. Mum used to turn it round for me sometimes, to show me. And what do I see reflected in that mirror, apart from my mother and myself? I see cushion-covers and antimacassars embroidered with crinoline ladies. Bonnets and lazy-daisies.

One much quoted verse from the Bible has always stuck in my mind:

For now we see through a glass, darkly; but then face to face: now I know in part; but then shall I know even as also I am known. And now stays faith, hope, charity, these three; but the greatest of these is charity.

When I hear this, I always think of my mother’s mirror over the fireplace. But why ‘darkly’? Surely when we look in a mirror we see ourselves with perfect clarity, if magically reversed? The reason is, that when those Bible verses were being written, mirrors were dim. The concept of mirror is translated ‘glass’, presumably because in the early 17th Century when the Authorised Version was in preparation, a mirror would have been made of glass. But in Biblical times mirrors were made of polished copper or brass. These would have been ‘dimmer’ than glass, and would have become dimmer still, over time, as the metal tarnished, and then they would need to be polished up again.

At the start of James Joyce’s Ulysses (and who among us has got beyond the start?) Stephen points to Buck’s mirror and says, “It is a symbol of Irish art. The cracked looking-glass of the servant.” There is always argument as to what exactly he meant by that. I just see a servant alone in some attic room with cheap, shoddy furniture. Quite likely that the servant would be assigned the dressing-table with the cracked mirror. In the early morning he peers at his fractured reflection and sees, not so much a distorted version of himself as a mysterious vision – something prophetic, shadowy, fluid and still-in-the-process: something that could become almost anything, in time; like the downtrodden Irish people.

It is said that a Japanese Emperor sent away a favourite pot to be mended. It came back stapled – the standard method in those days – but he thought it was ugly so he sent it to another craftsman, who transformed it into something new by piecing it together with gold, and it was so much more beautiful than it had ever been. This is how the art of kintsugi was born. Originally, repairs would have been in gold, silver or pewter; but nowadays a lacquer is made out of powdered gold, silver, platinum, copper or bronze. Damage is not disguised but celebrated.

The philosophy behind kintsugi – golden joinery, beautiful mend – has gone on to influence many other forms of art:

My Canadian sister used to tell me that it was ‘zen’ to include at least one mistake in any piece of knitting. I think the idea is that you can’t appreciate perfection except in contrast to some tiny imperfection – and also that perfection means cessation of movement, an end to flow. (I don’t need to introduce mistakes into my knitting; by the time I have finished there are always several to choose from.)

The same principle applies to the idea of the crack, that is in everything. Leonard Cohen immortalised it in Anthem:

Ring the bells that still can ring / Forget your perfect offering / There is a crack in everything / That’s how the light gets in.

So next time you’re looking in a mirror and find yourself agonising over imperfections, either the mirror’s or your own, remember about the light that wants to come in. Remember that once something is perfect it can make no further progress. The cracks are to let the daylight in: they mean you’re still growing. In the end, you may be broken and worn  but you will have gone past the dead end of the beautiful; you will have arrived somewhere unimaginably different from the place where you began. 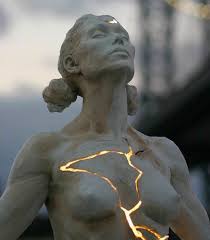 7 thoughts on “That’s how the light gets in”