You know how you get earworms – bits of songs going round and round in your head that just won’t go away. My latest episode of musical torment is a song called The Boys of Summer by Don Henley of The Eagles (1984). I won’t embed a video in case it attacks you too.

There is usually an underlying reason for a particular song getting stuck in one’s head, at least I believe so. Our conscious minds are very word-orientated; Subconscious doesn’t ‘do’ words – but he does almost everything else. Famously, of course, he does dreams. Freud and co were always banging on about the messages to be found in dreams. For example, a man dreams that a white horse is charging through his house in a panic, wreaking havoc. Not long afterwards he is dead. The house symbolises the body, because your body is the ‘house’ your soul, or what you experience as you, lives in. So, that horse was not good news.

Almost any source of imagery that is not-words can be, and is, used by Subconscious to get his message across. You just have to listen to pictures. Sometimes it can be a piece of music that haunts you. Sometimes it’s flashes of imagery that don’t seem to be apropos of anything in particular. I have, for a few seconds, found myself flying. Not actually flying but seeing the world from a completely different, aerial, perspective, and not from an aeroplane.

He ‘does’ déjà vu, I suspect, and he does coincidences. Whenever you get a sense of the uncanny, a slight chill or blurring of reality, that sense of something else going on – he’s probably lingering about. However… the boys of summer.

So the actual words of Don Henley’s chorus are:

Your brown skin shinin’ in the sun

You got that hair slicked back and your sunglasses on, baby

After the boys of summer have gone…

It’s about lost love, summer love, growing older, not going back – a mixture of all those things, perhaps.

It kept nadging at me, where does that phrase boys of summer come from? It just didn’t sound like something anyone would have made up on the spur of the moment, if you know what I mean – it was too compact. And it was ringing bells; very, very faint and annoying bells.

Weeks went by and I gave up trying not to think about it. I knew it was time to put on my Detective Hat again. I kept thinking – Shakespeare. So many phrases originate either in the Bible or one of Shakespeare’s plays – any mystery quote stands a 50/50 chance of being from either one or the other. In Cymbeline – a play with a plot so complicated that theatre managers were said to offer a reward to anyone who, having seen Cymbeline, could explain what had just happened – there is a beautiful funeral song. In Shakespeare’s time it would have been sung, but the music has been lost:

Nor the furious winter’s rages;

Thou thy worldly task hast done,

Golden lads and girls all must,

As chimney-sweepers, come to dust.

Here are some golden lads who, being gone (dead) need fear no more the heat of the sun. It felt like the beginning of the trail, but not all of it. It wasn’t close enough.

One red herring – somebody on a message board suggesting that Don Henley got the phrase from a book called The Boys of Summer by Roger Kahn, which is about the Brooklyn Dodgers – presumably a baseball team. Nope, I thought – red herring. Roger Kahn, whoever he was, got that phrase from somebody else. Like many authors before him, he had used a quote for a title, but it was a quote. It just felt like a quote.

Then somebody else suggested Dylan Thomas, and things finally began to fall into place. I read everything I could find of Dylan Thomas’ in my youth and what had been bothering me was a bat-squeak of memory. Dylan Thomas wrote a poem called I See the Boys of Summer. It’s complicated, scary, beautiful, and too long to include in full, so here’s an extract:

I see the boys of summer in their ruin

Setting no store by harvest, freeze the soils;

There in their heat the winter floods

Of frozen loves they fetch their girls,

And drown the cargoed apples in their tides.

These boys of light are curdlers in their folly,

The jacks of frost they finger in the hives;

There in the sun the frigid threads

Of doubt and dark they feed their nerves;

The signal moon is zero in their voids.

I see the summer children in their mothers

Split up the brawned womb’s weathers,

Divide the night and day with fairy thumbs;

There in the deep with quartered shades

Of sun and moon they paint their dams

As sunlight paints the shelling of their heads.

Dylan Thomas – his poems are like paintings by Hieronymus Bosch or Salvador Dali – or like the intricate covers of fantasy novels. You read them and think – this makes no sense. But yet it does. And that’s what’s so powerful and terrifying, that it does.

And I still can’t get rid of that earworm. 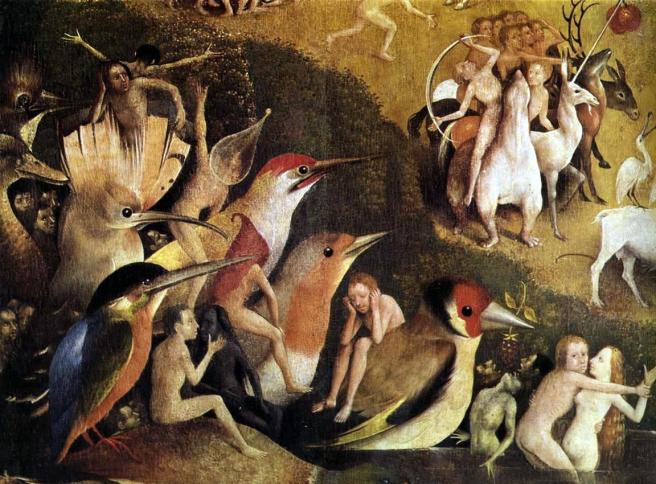 Bosch: from The Garden of Earthly Delights

Seasonal Living in Middle England - with a family of seven

LOOKING FOR A GOOD READ? TRY MADEKESIWORLD: with vibrancy touching on all aspects of an African society