People seemed to like my first attempts at photographing my actual cats on the Kindle as opposed to using stock photos. To tell the truth I’ve never been much good at photos, unlike my Mum who was constantly reloading the box brownie and pointing it in our direction.

She did try to teach me; reminding me to keep my back to the sun, keep my big fat thumbs away from the lens, and always to have something interesting in the foreground for perspective. Since she and Dad were cyclists the foreground object was nearly always a bicycle, artistically propped.

She had a whole cupboard full of albums. Charcoal grey paper. That rough, dry texture that makes your skin creep. Little captions in white ink, often with exclamation marks.

So, here are a few more of the Thirteen:

This is Martha inside her favourite fur-infested play tunnel, doing that weird nose-washing thing cat do with their tongues.

This is her sister Mary. They’re both tabby/tortoiseshell (calico in America, I think) but it’s not obvious.

This is William, the boss, with his friend Kevin.

This is my Mum’s cat, Kitten, who has now reverted to me. Kitten is 21 in cat years so probably over 100 in human terms. She spends most of her day – like this.

This is Old Rufus, so called because I already had a Rufus when this one was donated to me on the death of a neighbour. This is he of the ‘incurable brown and watery eye’ who featured in ‘ Sleeping with the Gingery Gentleman‘, a post that was to cause some hilarious misunderstandings. He’ s 18 or 19.

And below is Young Rufus. 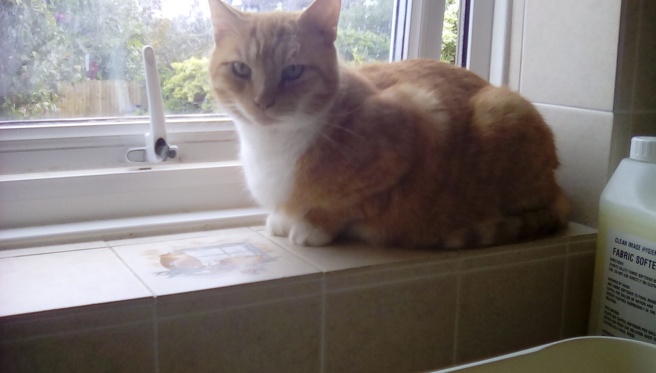