I was just wondering what the worst possible personality trait to have been born with. What would be a real curse? So, internet-says-this:

The trouble with all these nasty traits is that the person who possesses them is almost certainly not the person who suffers from them. That’s other people. If you’re conceited, arrogant or condescending you’re most probably unaware of the fact. Think of Lady Catherine de Bourgh in Pride and Prejudice; think of Mr Collins for that matter: Condescension and Conceit in league with one another and comfortable in their own skins.

Rather, it seems to me that the worst trait to be cursed with, from the point of view of the individual him- or herself, is a Sense of Justice. It’s the unshakeable conviction that the world must be fair – that things just have to work out right in the end. Most of us are afflicted with it and it’s so difficult to shake off.

The advice always seems to be: man up, get over it. The world isn’t fair; it never was and it never will be. Fairness/justice – that’s just something people invented so as to feel a little less scared. Who can bear to know that they are at mercy of an unfair, unjust world where just about anything could and might happen at any time?  Once again we are floating specks in a vast, impersonal universe.

I was talking to my sister yesterday – the Canadian one whose husband is gradually dying of cancer. She is tormented by this concept of fairness/unfairness as never before. They had planned their retirement together – time at last to drive off and discover the rest of Canada, time to travel the world; the new ‘retirement’ car that was already on order and now has to be cancelled; time to get stuck into all those much researched and looked-forward-to hobbies. How can all that not be going to happen now?

Having never really considered it before she finds herself tossed into that most basic of philosophical debates – the Problem of Suffering and Evil. She made the mistake of mentioning to a woman at her crafts group that she was feeling angry at God for what he had done to her and to her husband. How can he be a Loving God, she asked, and inflict such pain on the human beings he is supposed to have created?

She regretted this, rather. The woman didn’t say much at the time but went away looking troubled. Later that evening she telephoned my sister to deliver a long, long lecture on the necessity for Faith, for Prayer, and most especially for Hope. Her husband had also been quite ill in the past, she said, but she had prayed for him; she had put herself in the hands of the Lord. My sister said yes, but your husband wasn’t actually dying, was he? Dying’s different.

Why can’t we just say to someone who going through a terrible time, of course you’re angry? Anyone would be. What are you worth if you’re not even allowed to be angry and say so when life rears up drooling, like Alien, and bites you on the bum? My sister’s decided not to mention the God problem to anyone else, in case they turn out to be a tactless, deluded, insensitive do-gooder.

My only thought during this transatlantic telephone conversation was that if there is indeed a God he surely has far better things to do than torment the tiny people he created in his image and claims to love. Why would he put so much energy into creating Heaven and Earth, broad skies; towering mountain ranges; fathomless oceans – all the way out to the farthest, star-strewn reaches of the universe – only engage in such despicable, lily-livered, nit-picking tinkering and meddling? That’s the way humans behave, not gods.

It’s an age-old problem, not solvable by anyone else. Rather, it’s something each of us has to wrestle with alone, in the silence inside our heads. Life refines and changes us – we are tempered in the fire, like swords in the making; and maybe that’s the point. 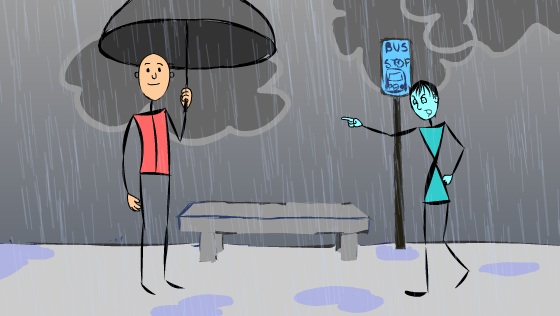 The rain it raineth on the just

And also on the unjust fella:

But chiefly on the just, because

The unjust steals the just’s umbrella.

3 thoughts on “The rain it raineth on the just”