Sorry – how many times have I said sorry in my life, I wonder? – for not having written much recently. I seem to have lost my mojo or, as Shakespeare implied, find myself unarmed when it comes to the battle of wits. How wonderful Shakespeare was.

The best I can manage – and only because this morning I foolishly mentioned to Daisy in a text that I might do – is a brief summary of yesterday, which, as indicated in my title, did indeed involve churches, carrot cake and chihuahuas. As to whether the chihuahua – a tiny, pretty little soul – was actually talking, I will leave to your imagination.

I have reached that age, and those financial circumstances, where I have to take my entertainment wherever I can find it, the main test being Is it free, or at least no more than 50p? Thus did I find myself in a village church at 10 o’clock on a Monday morning, sharing a long trestle table with a number of quite old people – who for some reason didn’t seem to be noticing how much less wrinkly than them than them I looked – or maybe only imagined I looked – drinking tea from a mug and consuming carrot cake from a saucer, with a fork that looked as if it might originally have been intended for fish. I had just bought a paperback cozy detective (set in the Cotswolds, wherever they are, somewhere in England, rural, prone to inexplicable murders, with pitchforks, in graveyards) from the wooden trolley in the corner, which was another 50p. Moths flew up as I unzipped the purse. Really pushing the boat out today!

The chihuahua arrived with his owner in a wheelchair – I mean, the chihuahua was in the wheelchair, which the owner was pushing along, with great difficulty – and sat himself opposite me. I’ve got verbal diahorreah, he said, and he was not wrong.

But then we’re all different, aren’t we? Wouldn’t be the same if we were all the same, would it. We’re all odd in some sort of way. Ooh, cake…

He’s seen the carrot cake, said his owner. And indeed his nose was twitching. The dog’s, that is.

After all, said the dog, they’re getting punished for it now. And quite right too.

Yes, serves them right. Why should they expect to get medals and honours and things when they don’t pay their taxes? Inland Revenue says no, you get to the back of the queue Mr Big Headed Old Comedian, Mr Internet Blogging Star Person…

I was impressed. A chihuahua who watched the news.

And later we ventured further – it was a kind of a Cheap Places To Go Trawl – to the hospital canteen, where for a modest sum we purchased overflowing platefuls of lentil risotto with boiled cabbage and carrots, followed by peach crumble. The canteen is in the basement. Anyone can go there and buy a whopping great platefuls of nourishing grub. Actually cooked, hot food, not the cheese-mayo-and-watercress-sandwiches (and probiotic yoghurt) one existed on most of last week. Smells like school dinners but looks and tastes so much better than school dinners ever did.

And to my mind there return images of actual sixties school dinners – scrag end of neck of lamb, lumps of gristle strung together with fatty elastic – liver and bacon, invisible under several feet of cold, greasy gravy in a communal tin, Gypsy Tart, so sickeningly sweet as to be good for nothing but drawing tramline patterns in with your fork…

Oh so much better, these hospital dinners. But just as cheap. And you can’t smell the smell after a while. It’s like perfume – all those little receptors inside your nose get full up and you can’t smell it any more.

And then, full of food, a quick drive down to another church, much more isolated, to find out when Harvest Festival was going to take place. Over the lentil risotto I had had a sudden whim, to go to a Harvest Festival service. The last one must have been when I was fifteen or so, at the Methodist. Something about Harvest Festival – and the Carol Services there will be before Christmas – suddenly seemed comforting, and indispensable. And of course, more or less free, though there would no doubt be a collection.

And then a little walk down a rutted track, looking out over the water at other land masses, at boats, and fields of corn. And the sun was suddenly quite hot, even though it’s autumn. I wondered whether to take off my cardigan. Got a bit of grit in my sandals. If I’d only known, I’d have brought the walking boots. 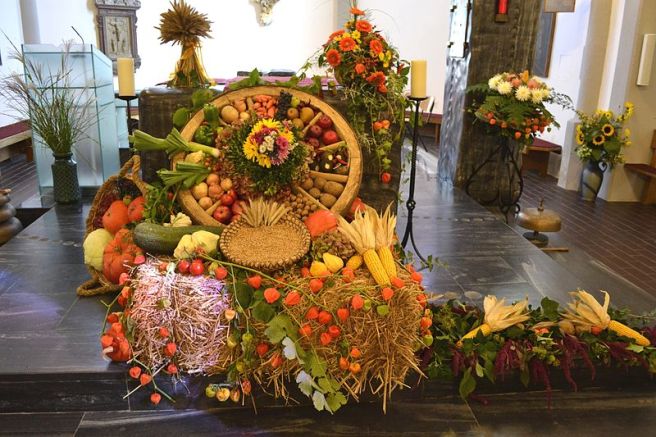 12 thoughts on “Of church, carrot cake and a chatty chihuahua”