Amongst the British public, apparently, FOMO (Fear Of Missing Out) has been replaced by FOGO (Fear of Going Out). Little by little they have been easing the restrictions that kept us locked down for months. In the past few days there has been quite a rush to ease this and ease that. Basically, now, almost everything is open, almost everybody can go almost anywhere and almost nobody understands where they can go, how close to anybody else they can stand, whether they can get on an aeroplane, when they need to wear a mask, etc etc. Basically, nobody has the energy to untangle it all, so they are just doing what they think.

I suppose I’m one of those Old, or New, Fogos.  Technically shielding – the strictest of all the lockdowns – will be suspended from August the first. Which means it might be reapplied if everyone starts dying again – as no doubt they will – but possibly on a regional ‘whack-a-mole’ basis, as the PM puts it. Meanwhile I could in theory now “bubble” with – I forget how many friends, relatives or households, whether outdoors or indoors, whether two metres apart or one. Since I have actually no friends, relatives or households within “bubbling” distance, and since I wouldn’t be “bubbling” even if hypothetical Loved Ones were to ask me to – I don’t really need to have memorised the details.

I have decided I’m Not Going Out until such time as there is a vaccine and I, and everyone else has had one. I can’t see how the situation has changed. The virus is still there, un-mutated, un-modified etc, and I still have my “underlying health condition”. I thought about it and decided I would rather die of the “underlying, etc, etc” than this virus, since the virus I have at least something of a choice about. I don’t want to go into hospital and be unconscious and gasping on some awful machine for weeks. I’d rather fade away gently, over years, and at a totally unpredictable rate. Besides, the cats require their two-legged Tin Opener. They have given me a stern talking to – Cats Come First, Mummy.

I have decided to live in the 1950s for a bit. I found a set of six “Miss Reads” on eBay, and they arrived from Cornwall this morning. There are hundreds (well, slight exaggeration – an awful lot) of Miss Read’s chronicling the uneventful life of two villages and a village schoolmistress. I remember them from years back. Comfort Reading. I intend to gradually munch my way through Miss Read, one second-hand paperback at a time – yet another pointless-but-pleasurable project. I have taped up a list on one of the kitchen cupboards, and am crossing them off as I go, to avoid duplicate purchases.

The above is a picture of a scarf – you didn’t know that, did you? – and I have been working on it it, in between all my other half-finished and largely pointless craft projects, for weeks. It is going to be 63″ long. I am starting to use up all the odds and ends in my “stash” – or rather “stashes” since I’ve got both a wool one and a fabric one. I feel a bit silly sitting indoors in a heatwave – curtains closed against the searing heat – knitting a thick woolly scarf of enormous and unnecessary length whilst binge-watching gaelic-language portrait-painting and farmhouse cookery programmes on i-Player, but somebody’s got to do it.

Until just now I hadn’t the faintest idea what to do with the scarf, once finished. Could I sell it on eBay – use the proceeds to purchase a few more Miss Reads? I was in the middle of washing up when inspiration struck – Canadian sister. It would pad out the Christmas present, and weighing relatively little would not incur too much postage. What better place for a giant, multicoloured scarf than Canada? Or, as they say in the top half of Scotland – something that sounds like a-Hannada.

I did start trying to teach myself Scottish Gaelic before, but gave up. It was too much for me – the way the spelling, the sound and the meaning of a word were totally unrelated, and furthermore, all had a tendency to shift and mutate according to what sort of grammatical state you happened to have stumbled into. But this time I seem to have got over my fury at the un-Englishness of it all. I am delighted to learn that a rabbit is a rabad, pronounced something like – rebbich! – with lots of spit. Except when it’s a coineanaich, pronounced conyanyocccchhh. Probably. 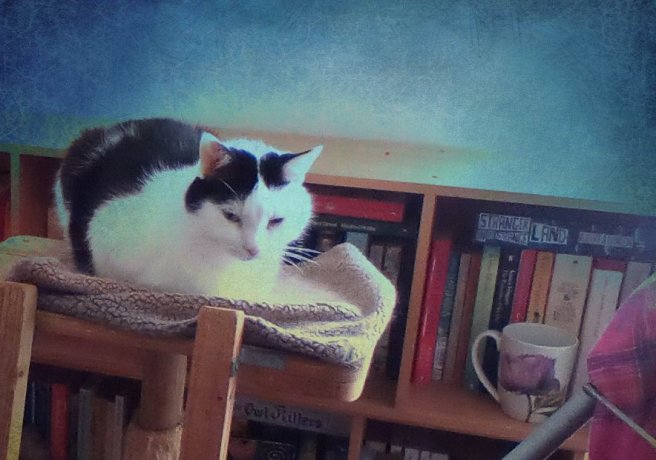