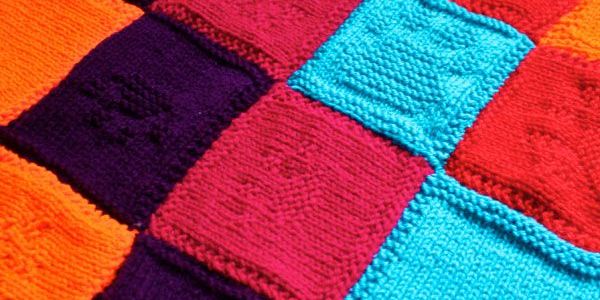 I have observed this, with my decision-making process. Other people seem to identify a need or a problem, work out a strategy to deal with it, then implement that strategy. So it’s kind of cause and effect. I don’t do that, mostly. I find myself doing things, am mystified as to why I am doing them, and then try to work out why I might have decided to do them.

So, it now occurs to me that I am knitting the dog blanket for Queenie, my almost-Godmother’s almost-dog, for Christmas. Queenie is old, and has been quite ill this year. She doesn’t quite belong to Godmother, who also isn’t technically, officially my godmother. But she ought to be.

Queenie is a small, white nondescript pooch, possibly a Scottie or a Jack Russell or combination of both – I’m not good on dog breeds. She belongs to the overweight, elderly alcoholic woman who lives over the road from Godmother. Godmother regularly responds to slurred phone calls demanding rescue from the foot of the stairs, which the lady is unable to climb due to her day-long wine consumption.

Queenie has to return to the alcoholic lady for one hour a day, but Godmother, who is in her eighties, takes care of Queenie’s daily walks in the park, vastly expensive veterinary care and general need for love and affection.

So Godmother is my guardian angel, Queenie’s owner’s guardian angel, and also of course Queenie’s. I can’t say how much it has comforted me, throughout my life, to know that angels do walk the earth, and that one of them, miraculously, assigned herself to me.

So, the dog blanket is for Queenie. And of course, I knew that all along.

Didn’t I?
NB: Please see my reply to Belladonna’s comment below for further details and a link to the pattern, which was originally connected with an appeal by Battersea Dogs and Cats Home.

I have a bit of a soft spot for Woman’s Realm. Not that I buy it. Oh no, that would be… a no-no. Mostly I get a heap of them, back-dated, in a Tesco bag. It’s a bit like one of those drug-dealer exchanges on motorway slip-roads. Betty passes them over to me in the car park of Mum’s care home. We meet up there before the Visit, cars parked neatly side by side, both of us dreading the Going In and longing for the Coming Out. It sounds awful, doesn’t it? Not wanting to go in? I feel a bit better because Betty feels the same. I email her in advance.

Are you OK for a visit to Mum this Sunday, usual time and place?

And inevitably she emails back something like: I’m game if you are or If you can do it, I can.

I realise she is not coming to see Mum, now, but to give me the courage to see her.

Older than Mum, she has been with us both since before I was born. She knew me when I was an awkward bump. She used to look after me every Friday evening so that Mum and Dad could go out. A single lady, she told me recently she was terrified every time that Something Dreadful might happen to me whilst I was in her care and it would all be her fault. And yet she is reassurance itself.

It has always seemed to me that Betty could cope with anything. She is the very embodiment of Keep Calm and Carry On. But I sense that she is out of her depth in this nightmare of a place, and with the nightmare Mum is becoming. Too close to home, I guess, to be sat amongst those who are the same age as you or younger; in constant peril of being mistaken for an inmate and hoisted into a wheelchair or forced to drink yet more cranberry juice from a plastic cup.

Poco? She pinches her fingers together. She has no teeth. Her chin all buts the end of her nose, like the witches in fairy-tale book illustrations.

And then a lady from the church arrives to bring her communion. We watch as the priest-lady sets out a tiny cross on a white handkerchief. It has been ironed into quarters. She takes out a prayer book, and a little silver container of communion wafers. She has just gone through the exact same service for the only other Catholic lady in another room. We listen to the prayer for the sick, and to other prayers. We listen as she says In the name of the Father… and Maria crosses herself and mumbles in nomine patris…Bella! I find the prayers soothing, though they are not intended for me. I wonder if I should start reading the Bible a bit, knowing I probably won’t.

Betty, I sense, does not find the prayers soothing, rather the opposite, and yet she is the nearest thing to a Guardian Angel I have ever known. She guarded Mum and now she’s doing what she can to guard me. But she is fidgeting and trying not to look at the door.

Well occasionally in moments of extreme stress I do buy a Woman’s Realm. Woman’s Realm is to me what chocolate – or Baileys Irish Cream – are to other women: comfort reading, because the magazine reminds me of Nan.

Every Sunday I used to go along the road to Nan and Grandad’s for Sunday Dinner and Sunday Tea. A whole day’s respite, if you counted Sunday School first, from having to keep out of my father’s way and from having to protect my mother from anything that might set off her Nerves again and have her lying on the sofa with her eyes shut, clutching a handkerchief in hands that shook and shook.

Every Sunday – well, I’ve written about it before – but while Nan was cooking our Sunday Dinner I would hang around with Grandad in the living room. He would fill his pipe with St Bruno Flake and fill the whole room with a thick fug of aromatic, if unhealthy, smoke. He would idle through pink back-copies of The Carpenter & Joiner and I would read Nan’s Woman’s Realm.

I was supposed to be reading it only for a cartoon about a family of little robins – Mummy Robin, Daddy Robin and… Other Robins, but I didn’t understand the cartoon much. What I liked to look at was the knitting patterns – lantern-jawed husband-material posed stiffly in black and white, showing off their new blackberry-stitch cardigan – babies surrounded by lacy layettes, a halo of little shawls, bonnets, cardis and bootees of infinite complexity. 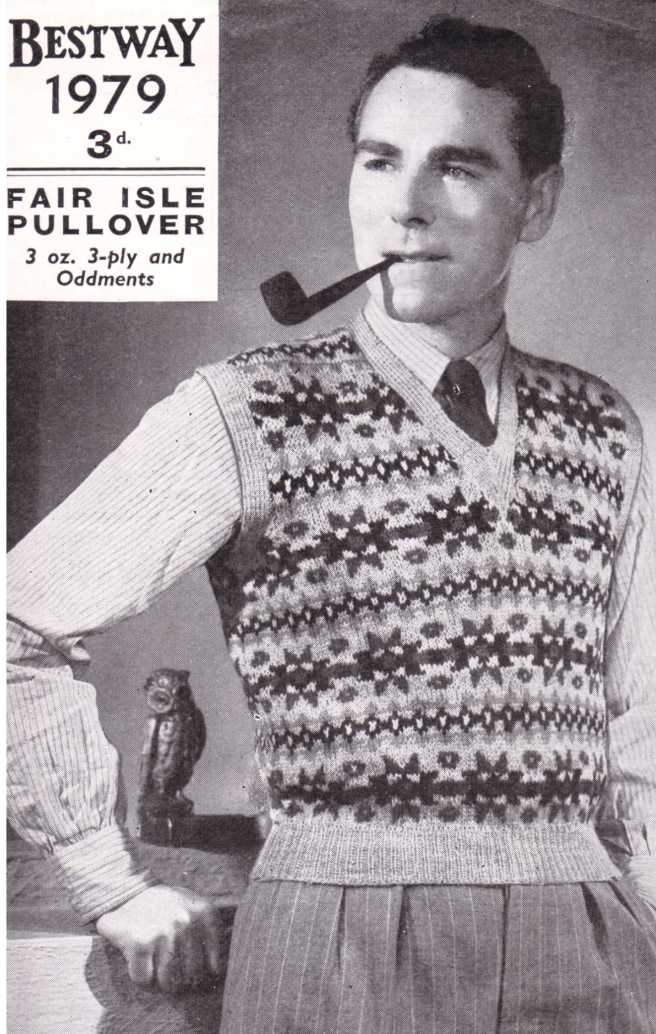 I seized my chance to create one of these challenging little lacy things – a cardigan, it was, complete with buttons and knitted buttonholes – for my youngest sister when she was expecting her first child. It didn’t go down too well. Apparently the modern baby wears the baby-grow.

I read at least sections of those endless romantic serials, wondering why there was such a scarcity of stern, broken-hearted Highland Lairds in my part of Kent.

And, of course, I read the Problem Page. It was always at the back, so easy to find. From readers’ letters I learned, after a fashion, the facts of life. My innocent requests for the Meanings of Long Words forced Nan to explain, albeit in a whimsical and euphemistic manner, Certain Things to me that might come in useful later (though not very useful, as it turned out). I doubt if Mum would even have mentioned them.

My new diary (see previous post) fell open at a quote from the other Spock, that evil twin, Dr Benjamin. ‘Happiness,’ he says ‘is mostly a by-product of doing what makes us feel fulfilled.’ So far, so asinine. Except that he didn’t make my mother happy and he made me miserable.

I can’t remember exactly when it was – teenage years, and I expect after I had thrown some tantrum or other – that my mother came out with this statement, by the end of which she was nearly in tears: ‘I think it may be my fault that you Turned Out The Way You Did. You were my first baby and I relied on Dr Spock’s book [Baby and Child Care, 1946] to tell me what to do. He said not to pick up a crying baby, so I stood outside your room, for hours sometimes, crying myself, listening to you cry. But I dared not go in and pick you up.’

Now, as hurtful information this works on multiple levels. The first to hit me – unintended by my mother – was the realisation that she did not regard me as a lovable or normal child – that I had ‘Turned Out’ in some way. Until that moment, although I sensed I might not have been their preferred option, child-wise, I had not understood that they regarded me as actually defective. I’d known since birth, of course, that I had been dumped here from some spaceship or other – all of us aliens know that. It’s like waking up in the middle of a football match. You don’t want to play but there seems to be no off-football-pitch alternative. Everybody’s bellowing and running for no obvious purpose and you wonder how come they have the rules and I don’t? That’s just not fair.

The second hit was – how could you have been so stupid as to follow the advice of some ghastly man on the other side of the world (practically) rather than following your  feminine instincts? Even with a first baby – why didn’t you just pick me up for God’s sake? Didn’t you know…? But of course, she didn’t know.

The third was, how dare this Man… with his well-meaning but totally defective advice place such a burden of guilt on my mother for all these years?

So, I didn’t like him. It may well be that my mother misinterpreted Baby and Child Care. I haven’t read it, and probably won’t. It may well have been a misunderstanding, a misreading – or self-justification.

Then Star Trek came on TV and I discovered Science Fiction. The first Star Treks, as anyone watching them nowadays can see, were pretty disastrous. Only slightly better than the first Dr Whos for wobbly scenery, weird costumes (aliens often seemed to be a sweaty greenish colour) and a shiny studio floor showing through underneath the plastic boulders. I couldn’t be bothered with Captain Kirk. Kirk –pfft! A fig for your Captain Kirk and his swashbuckling ways.

But I developed an instant affection for Leonard Nimoy which has never dimmed in spite of his death a while ago at the age of – I believe – 83. And for Spock, of course. It wasn’t just those ears – though they were fascinating and – let’s admit it, ever so slightly sexy. It was the fact that he was wise, and gentle and alien. When I imagined my Guardian Angel, it looked like him. He came from, in some sort of way, where I had come from – or where I would have felt at home.

So, if a Vulcan vessel happens to be passing, do feel free to Beam Me Up.